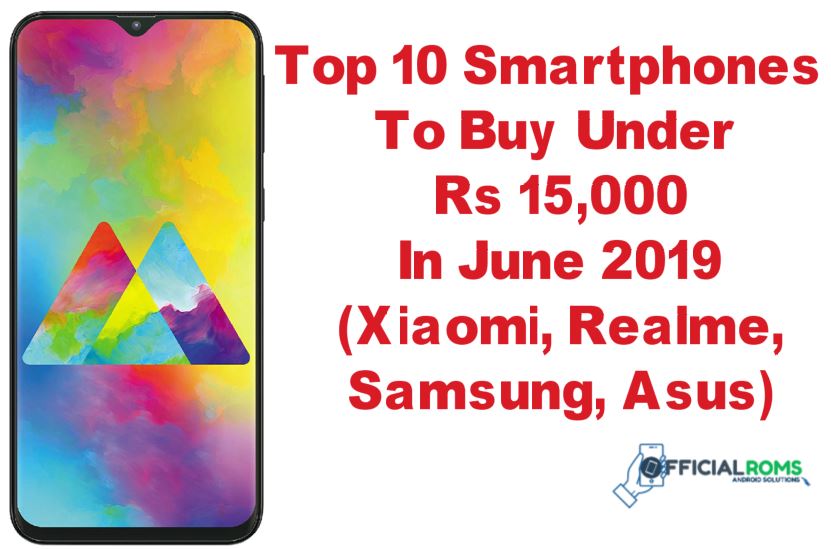 The June edition of the top smartphones under Rs 15,000 remains almost the same as last month with no big new launches. The only addition remains the newly launched Redmi Note 7S replacing the regular Note 7.

Redmi Note 7 Pro and Realme 3 Pro continue to dominate the under-15,000 space.

We took out Honor phones from the list given their unsure future of Android upgrades given the current US-ban scenario. It’s better to wait for a few days to see what happens next, and then buy a Honor or Huawei smartphone. Undoubtedly they have great budget devices, but we will keep Honor devices off the list for now.

The top smartphones under 15,000 rupees list remains largely same except for the new addition of Redmi Note 7S and promotion of Realme 3, as two top Honor devices: Honor 8X and Honor 10 Lite are omitted for the time being.

Here’s goes our list of the top 10 smartphones under Rs 15,000 for June 2019 with the best-sellers from Xiaomi, Realme, Samsung amd Asus.

On top of the list we have the much-popular Redmi Note 7 Pro, one of the current best smartphones you can under 15,000 rupees. Backed by some top flagship-level features and specs, Redmi Note 7 Pro comes with a premium glass design body on the out sandwiched between Corning Gorilla Glass 5 body.

Redmi Note 7 Pro on top has a 6.3-inch Full HD+ dot notch display. The smartphone runs on Snapdragon 675 processor with on MIUI 10 top based on Android 9 Pie backed by a 4,000mAh battery supporting 18W fast charge.

At the back, Redmi Note 7 Pro comes with a dual camera setup comprising of the 48MP Sony IMX 586 sensor as its primary lens coupled with a 5MP secondary depth sensor. The smartphone is available starting at just Rs 13,999 via Flipkart.

Up next we have the newly launched Realme 3 Pro. The new smartphone from Realme passes all the top requirements with flying colours. Realme 3 Pro comes with a high polycarbonate body on the featuring a 6.3-inch full HD+ water drop notched display on top. It has added Gorilla Glass 5 with a gradient design at the back.

At the back, the smartphone has a dual camera setup featuring a 16MP Sony IMX 519 sensor with an f/1.7 aperture coupled with a 5MP depth sensor with an f/2.4 aperture. The main sensor is the same lens used in OnePlus 6T.

The smartphone is powered by Qualcomm Snapdragon 710 processor, available in two storage options: 4GB/6GB RAM with 64GB/128GB of storage (expandable upto 256GB) running on ColorOS 6.0 based on Android 9 Pie. The 8GB RAM model is also on its way.

The whole Realme 3 Pro package is backed by a 4,045 mAh battery supporting VOOC 3.0 fast charging (20W) with a Micro USB powered brick inside the box.

In our list, Samsung Galaxy M30 is only smartphone to feature triple cameras at under 15,000 rupees. Samsung Galaxy M30 dons a 6.4-inch Super AMOLED Full HD+ display featuring a water drop notch on top called the Infinity-V display. The smartphone runs on Samsung’s own in-house Exynos 7904 SoC octa-core chip coupled with 4GB or 6GB of RAM.

Galaxy M30 at the back features a rear triple camera setup comprising of a 13-megapixel f/1.9 primary shooter coupled with a 5-megapixel ultra-wide lens and a third 5-megapixel depth lens.

Galaxy M30 runs on Android 8.1 Oreo with One UI on top backed by a massive 5,000mAh battery with support for 15W fast charging (ships with the adapter in the box).

The newly launched Redmi Note 7S takes the next spot replacing the standard Redmi Note 7. The new Note 7S from Xiaomi is currently the cheapest 48MP camera smartphone in India. It packs in the same 6.3-inch Full HD+ notched display in an 19.5:9 aspect ratio with Gorilla Glass 5 protection. The same level protection is available on the other side.

Redmi Note 7S is powered by the same Qualcomm Snapdragon 660 processor coupled with 3GB/4GB of RAM and 32GB/64GB of built-in storage, expandable upto 256GB via a microSD card.

At the back, Redmi Note 7S comes with a dual camera setup featuring a 48MP main sensor coupled with a 5MP secondary depth sensor. Do note, it’s the Samsung ISOCELL GM1 48MP sensor, and not the Sony IMX 586 one.

Up front, Note 7S sports a 13MP sensor with an f/2.0 aperture supporting AI Beautification, HDR and more. The whole package is backed by a 4,000mAh battery supporting 18W fast charging (without the brick inside the box) running on the latest Android 9.0 Pie based MIUI 10.

On top the smartphone offers flawless stock Android experience with 8.1 Oreo (Android Pie update by April-end) and a massive 5,000mAh battery capable of running for at least two days on moderate use.

The Samsung bestseller, the Galaxy M20 is another mid-budget powerhouse available in the country under Rs 15,000 rupees. Galaxy M20 sports a 6.3-inch full-HD+ offering a screen resolution of 1080 x 2340 pixels with a Infinity-V styled notch on top in a n19.5:9 aspect ratio and glossy plastic back.

Samsung Galaxy M20 runs on Exynos 7904 chip coupled with 3GB or 4GB RAM with 32GB and 64GB of storage respectively, expandable up to 512GB with an external microSD card.

At the back, Galaxy M20 comes with a dual camera setup comprising a 13MP (f/1.9) main sensor coupled with a 5MP ultra-wide angle sensor.

Up front, the Samsung smartphone has an 8MP (f/2.0) sensor with an in-display flash. Galaxy M20 runs on Android 8.1 Oreo with One UI on top backed by a massive 5,000mAh battery with support for 15W fast charging (ships with the adapter in the box).

This Realme smartphone from last year, the Realme 3 Pro predecessor still remains of the best smartphones you can currently buy at under 15,000 rupees. Realme 2 Pro is now available starting at Rs 12,990 offering great value for money at the price

The smartphone runs on Snapdragon 660 processor, same as Redmi Note 7.

Realme plans will soon be rolling out the Android 9.0 Pie as well. While a few specs may seem outdated, but still the smartphone is one of the best smartphones you can under 15,000.

The second generation Xiaomi Mi A2 smartphone is currently available at a permanently discounted price of Rs 11,999 for the base model. Launched last year a starting price of Rs 16,999 in August, Mi A2 with clean stock Android seems a reasonable option at under 15,000 if you wish to experience seamless pure Android Pixel-like UI.

The smartphone is an Android One device, directly backed by Google when it comes to security patches and two guaranteed version upgrades.

Thee first Realme U series smartphone from December last year still remains a viable option at under 15,000 rupees. The first selfie-focused series from Realme, the Realme U1 currently retails starting at a discounted price of Rs 9,999. The smartphone is currently available at a flat Rs 1,000 discount on Realme India online store.

The smartphone runs on Android 8.1 Oreo with Color OS 5.2. The Android Pie-based Color OS 6.0 update will arrive by end of June. The company also added a new Realme U1 variant with 64GB storage and 3GB RAM.

Up next on our list, we have another budget beast. The new smartphone from Realme packs in a punch, available starting at just Rs 8,990. The smartphone runs on Mediatek’s flagship Helio P70 chip, built on a 12 nm process. At the back, it has a 13MP + 2MP dual camera system with a 13MP shooter upfront.

Though, Realme 3 has a 6.22-inch only-HD+ display with a water drop notch Corning Gorilla Glass 3 protection.

The whole package will be backed by a massive 4,230 mAh unit running on the latest Android 9 Pie OS with Color OS 6 skin on top. For Rs 8,990, you can grab the 3GB RAM and 32GB storage model, with support for extended storage.